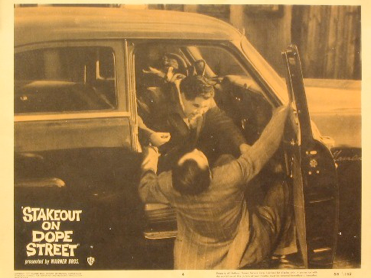 The scene: a back alley somewhere in LA late one night. Two narcotics detectives have just picked up a suspect carrying a leather valise containing run-of-the-mill ladies toiletries: eau de parfum, lipstick, makeup, facial powder. Except that last can doesn’t have facial powder in it; instead, it holds two pounds of pure, uncut heroin–junk, smack, H.

Up until now, pretty typical of a 1950s film noir; the next morning, typical noir meets typical 1950s wholesomeness as the valise is found by  Julian “Ves” Vesupucci as he is out on a delivery for his father’s grocery. Bringing the bag to the grocery’s back storeroom–where Ves and his friends Jim and Nick hang out–the trio quickly jimmy the bag’s lock, hoping to find a fortune in jewels inside. Their disappointment in finding the bag filled with beauty supplies is palpable; they figure they can get at least four or five bucks for the bag from the local pawnshop, and Jim decides to give the perfume and some of the makeup to his girlfriend, Kathy, who works the counter at the local bowling alley. With facial powder seeming less romantic than perfume, Jim leaves it in the storeroom as the trio hits the streets.

From there, the movie follows a somewhat formulaic path mixing both elements of film noir (both the cops and the criminals spread a dragnet over LA looking for the lost drugs) and teensploitation films (see Americas youth corrupted by demon drugs). Needless to say, the three friends find out from the newspapers that the valise contained two pounds of heroin, and, somewhat improbably, they recover the can after sifting through piles of garbage at the city dump. They soon decide to seize this opportunity to realize their dreams of wealth, and with the help of an ex-con junkie who works with Nick, they begin to unload the junk across the city.

As one could imagine, three teenagers and a drug-addled loser living in a tarpaper shack can’t outwit both the crime syndicate and the police forever.  Both sides of the law finally close in on the four drug entrepreneurs,  and the movie moves towards a conclusion that would warm the heart of the then recently-retired Joseph Breen. (Of course, two-thirds of the movie spends most of its time flaunting the production code openly).

So ‘Stakeout on Dope Street’ isn’t the best film noir ever made; heck, it isn’t even the best film noir released in the spring of 1958 (that honor would go to ‘Touch of Evil’, which premiered a week or so before ‘Stakeout’). It does, however, have a few things that make it an interesting movie.

First off, the movie was shot on location in Los Angeles; like the best on-location noir (such as ‘The Naked City’), ‘Stakeout’ gives you a feeling of the other side of the city, aware from the bright lights and celebrities. They’re all there–nice businesses like a jewelers or a Mercedes dealership, average businesses like a grocery or bowling alley, seedy businesses like a pawnshop or a pool hall.

The realism continues as we get to know the three main characters, Ves, Jim and Nick. Nick and Ves aren’t that interesting, stereotypes in their own ways–Nick is the overbearing bodybuilder with no moral qualms; Ves is the ultimate follower, who’s just bright enough to deliver groceries for his father. Not really ‘Father Knows Best’ or ‘Leave It To Beaver’ types.

Jim is more interesting; the sensitive artist type, his dream is to use any money he makes from selling the drugs to settle down and marry his girlfriend, Kathy, and travel to Rome and Florence to learn art. Goaded on by Kathy, he’s the one with the moral qualms about dope dealing; he’s the one who feels he needs to find out first hand about the after affects of dope; he’s the one who’s the ultimate hero of the movie. He’s a beatnik without beard, bongos and goofy language; he may be rebel, but it’s in the cause of art and love.

The movie also takes a look at some of the social realities of the Eisenhower years, painting a more interesting picture than the nostalgic image that the country generally carries of that time. Kathy remarks offhand how she wishes Jim would draw a picture of her where she wasn’t nude, so her family could see it. In an extended and graphic sequence, we also hear and see Danny, the junkie they hired as their dealer, go through the pain and terror of detox.

This movie was the directorial debut for Irvin Kershner; 22 years later, he would go on to direct ‘Star Wars Episode V: The Empire Strikes Back’. ‘Empire’ would be the highlight of Kershner’s otherwise mediocre career. The last feature film that he directed was ‘Robocop 2’ in 1990.

Mystery novelist James Ellroy picked ‘Stakeout’ as one of the movies to be broadcast on the night that he was guest programmer for Turner Classic Movies in 2007. During an interview with TCM host Robert Osborne, Ellroy stated that the movie had a special resonance for him since it was set in 1958 in Los Angeles; that was the year  when Ellroy’s mother was brutally murdered in L.A. In 2003, the book ‘Black Dahlia Avenger’ posited that  Ellroy’s mother was murdered by the same person who killed the Black Dahlia.

The soundtrack to the movie, bopping along to the cool tones of West Coast Jazz, was performed by the Hollywood Chamber Jazz Group. The soundtrack was released on LP back in the ‘50s, and can still be found on eBay. –JMD

Calendar of Reviews and Posts